MetroBank, Probe Foundation extends search of Journalists of the Year 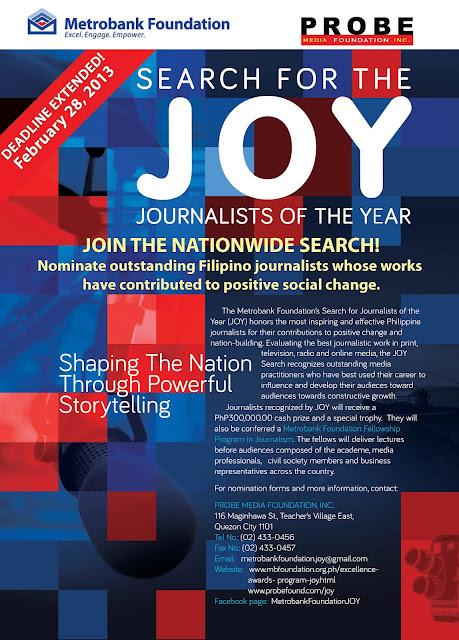 In a recently held orientation session for the nationwide Search for Journalists of the Year (JOY) attended by media practitioners, the Metrobank Foundation, Inc. (MBFI) and the Probe Media Foundation, Inc. (PMFI) announced the extension of the deadline for submission of nominations until February 28, 2013.

"The search is a fitting tribute to our Filipino press people on or behind the camera.  It is about time that we recognize their vigilance translated into powerful storytelling that contributed to nation-building and an informed citizenry," said MBFI president Aniceto Sobrepeña.

While PMFI founder Cecilia ‘Che Che’ Lazaro expressed that “As journalists, we value our reputation based on what we write and report. More than the fame, what is important to us, as journalists, is that the stories we tell have created positive impact among the people we serve.  I am happy that JOY winners have the opportunity to share their expertise through the conduct of the lectures.”

Qualified for this search are Filipino media practitioners currently residing in the Philippines. They must have been working in the media industry for at least ten (10) years covering the period from January 1, 2002 to December 31, 2012 and must be practicing any medium (print, radio, television or online) of journalism in the Philippines on a regular basis and as a primary source of income.

Nominations are open to everyone of legal age. Self‐nominations are also allowed.  Nominees may be endorsed by their current supervisor, superior or editor, provided that the endorser is attached to a bona fide media organization or news agency.

The three winners will each receive PhP300,000 and a special trophy. They will also be conferred the Metrobank Foundation Fellow in Journalism where they will have the privilege to share their expertise and experience through the conduct of professorial lectures before an identified audience in select academic venues.The program will highlight the journalists’ contributions to both the industry and to society, and give the public a chance to learn from these noteworthy individuals.

The JOY celebrates and honors distinctive Filipino journalists from print, broadcast and online media for their body of work that has contributed to the development of the nation and inspired other media practitioners.  It also encourages responsibility, accountability and excellence in storytelling.  It intends to recognize outstanding mature journalist sometime during his or her prime as viewed in the context of the whole landscape of the journalism profession.  Journalism would be viewed as a life as well as a primary source of livelihood, not just a craft, vocation or career.