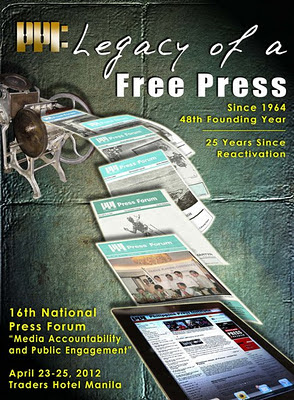 For the first time since 1997 when the first press forum was organized, the Philippine Press Institute will cover live its 16th National Press Forum on Media Accountability and Public Engagement via video streaming on April 23 and 24 at Traders Hotel Manila.

This is made possible by the Information Capital Technology Ventures (ICTV) which offered its services and technical resources for free. Considered as one of the most anticipated annual gathering of publishers and editors from the 72-member newspapers of the institute, the Press Forum will be accessed via www.ppinpf@nowplanet.tv, to specifically cater to audiences who will not be able to attend the conference.

This year's exclusive broadcast partner TV5, will also cover the event from start to finish. Speeches from the main forum and industry forum will be made available in the PPI website, www.philpressinstitute.com.

President Benigno S. Aquino III is keynote speaker in the opening ceremonies. He is the first head of state to grace the annual event. Ombudsman Conchita Carpio-Morales is guest of honor in the Civic Journalism Community Press Awards which will honor outstanding community newspapers for excellence in various categories.

The PPI is celebrating its 48th founding year and 25th year since reactivation in 1987. Dubbed as "PPI: Legacy of a Free Press", the celebration recognizes the restoration of democracy in the country through the historic People Power that eventually reinstated social institutions, the media included. The slogan also allows for re-examining media today as the fourth estate and watchdog.

As in 2008 and the succeeding years, this year's National Press Forum and Community Press Awards are being supported by The Coca-Cola Export Corporation through the civic journalism sustainability project that has been extended until December 2013. Guillermo Aponte, president and general manager of Coca-Cola Philippines has been invited to give a message in the awards program.
Posted by Mabuhay Online at Thursday, April 19, 2012