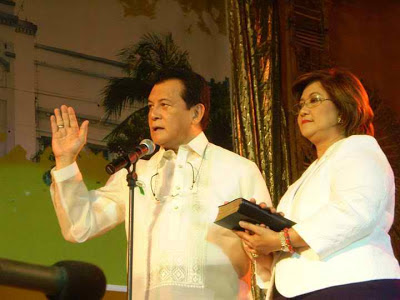 CITY OF MALOLOS- Second termer Governor-elect Wilhelmino M. Sy-Alvarado will lead all elected officials in Bulacan as they take their oath of office on June 30 at the Bulacan Capitol Gymnasium, 7:30 in the morning in this city.

Executive Judge Maria Theresa Arcega will preside the oath taking of provincial and district level officials while Alvarado will swear into office the elected local government officials of the three cities and 21 municipalities in Bulacan.

Alvarado said the mass oath taking which is dubbed as “Sabayang Panunumpa Nagkakaisang Pamamahala para sa Lalawigang Dakila” is a perfect venue to call together all the public servants, regardless of their political affiliations to unite in leading and serving their constituents starting July 1 up to the next three years.

Provincial Administrator Jim Valerio added that after the mass oath taking, Alvarado will also present his accomplishments and future plans for the province of Bulacan.
Posted by Mabuhay Online at Friday, June 28, 2013