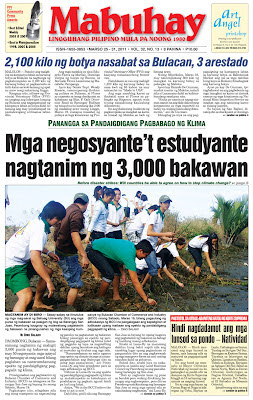 Four weekly and three daily regional publications have made it to the finalists' circle in the 2011 Civic Journalism Community Press Awards.

Daily publications Sun.Star Davao (Davao City), Sun.Star Cebu (Cebu City) and Sun.Star Pampanga (City of San Fernando) also made it to the initial round of judging.

The winners will be announced during the awards program on April 24 at Traders Hotel Manila during the 16th National Press Forum and Annual Membership Meeting of the Philippine Press Institute.

Ombudsman Conchita Carpio-Morales will be the guest of honor and speaker for the 16th awards season.  No less than President Benigno S. Aquino III will keynote the opening ceremonies of the conference which has "Media Accountability and Public Engagement" as this year's theme.

The PPI is celebrating its 48th founding year and 25 years since reactivation after the People Power Revolution.

The additional category on culture and arts, which is this year's theme for photos and stories exhibit will be presented by the National Commission on Culture and Arts (NCCA).  The winner of the exhibit will receive trophy and cash. 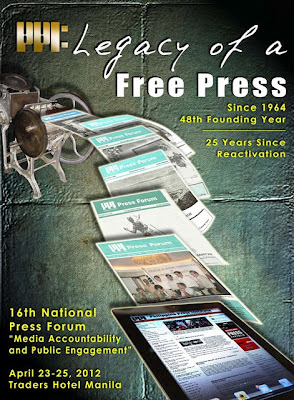 The management of the awards, cash prizes and trophies are being funded by The Coca-Cola Export Corporation (TCCEC) and the six newspaper-members of the Board such as Malaya, Philippine Daily Inquirer, BusinessWorld, The Philippine Star, Manila Standard Today, and the Journal Group.  The TCCEC is the major strategic partner of the PPI for its project on Building Better Communities Through Civic Journalism since 2002.

Part of the donations will go to the training fund of the Institute to support workshops and seminars for its members for continuing media education and professionalization.
Posted by Mabuhay Online at Friday, March 23, 2012