PPI: Legacy of a free press 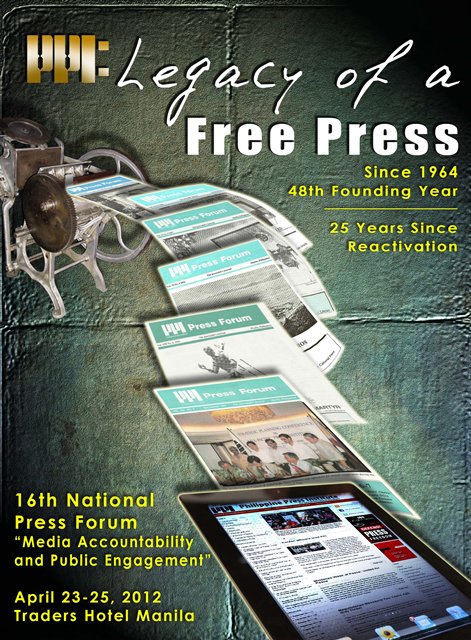 After a hiatus of almost two years, the official PPI website, www.philpressinstitute.com, is finally up. It took a dramatic change early this year when both the PPI Board and the members took note of PPI’s absence online.

Most notable now are the contents and information that are easy to access via the categories and tabs. Noticeable too, are the contributions from the members which give importance to their thoughts as PPI members and as media practitioners in their respective areas.

A special segment is devoted to partners for their programs and announcements for the media. The 2002-2010 report on the partnership with Coca-Cola Export Corporation (TCCEC) is underscored.

The new website also launched the theme “Media Accountability and Public Engagement” for the 16th National Press Forum and 2012 Membership Meeting, scheduled from April 23 to 25 next year at the Traders Hotel Manila, in celebration of the Institute’s 48th founding year and 25th year since reactivation.

Starting today, it will have a separate tab on the 16th the National Press Forum whose preparations are now underway. We also specially announce that there will be an additional awards category, “Best in Culture and Arts” that will be given out in the next Civic Journalism Community Press Awards on April 24, 2012.

“We need to set new directions and make the PPI more relevant and responsive to the challenges of times,” Amado Macaset, PPI chairman-president and publisher of Malaya, said.

The Board unanimously approved the conference theme during its regular meeting in October 2011.
“We also need to talk about the industry, about ourselves,” Vergel Santos, PPI vice-chairman and publisher of BusinessWorld, said.

Both Macasaet and Santos were referring to media corruption that continues to challenge and haunt the professional and ethical practice of journalism.

The refurbished PPI website is touted to be a hub of resource and reference materials that should come in handy for the members and researchers as well. For as long as they are available, they will be uploaded for access by the members.

“The challenge now is to consistently update it,” Elnora Cueto, Trustee for Luzon and publisher of Lucena Herald, said.

Atty. Jesus Dureza and Ruevivar Reyes, trustees for Mindanao and Visayas respectively, said they are more than willing to contribute articles for the website. “It is one way of reaching out and connecting to the members,” Dureza said.

The list of current official members and the membership rules can also be found in the website. The list or directory of members is subject to updating, depending on the status of a publication’s membership and entry of new members.

The PPI website is being maintained on a very modest sum.